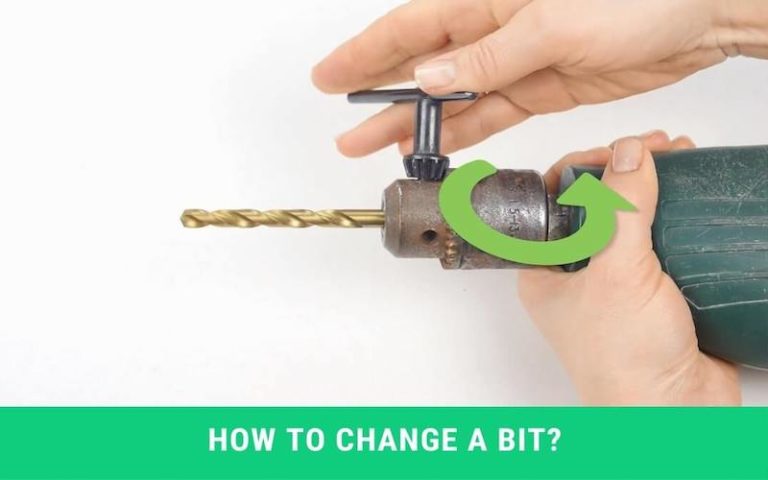 Whether you require various size holes or simply the bit gets dull, changing the drill bit is a common yet crucial task. So, learning how to change a drill bit can help you replace the new and desired size bit properly avoiding the bit slippage and injury. Apart from these, the drill bit changing method varies considering the type and condition of the drill.

Therefore, we have covered plenty of drill bit changing processes to let you change the bit from a power drill, drill press, or even a jammed drill.

The chuck that holds the drill bit in place varies depending on the type of power drill. So, whether you have a corded or cordless drill, it may have a keyed or keyless chuck. Following that, we will discuss the drill bit changing method step by step for both keyed and keyless chucks.

How to Change the Drill Bit on a keyed Chuck

Having a keyed chuck on a drill bit makes it much easier to change the bit. The process is:

Use the key of the chuck

Using the key head, you can adjust the drill’s chuck. The key head comes with a jagged wheel crown shape. To release the chuck, put the key tip into any of the holes of the chuck and interlock the teeth of the key. In general, the drill includes a place to keep chuck wrench. Even though it is extremely easy to locate the chuck wrench storing place on a corded power drill, it is slightly harder for a cordless counterpart.

After placing the wrench, turn it anti-clockwise. You will find the jaws are slowly opening up. Once you got enough space, stop rotating the wrench. Generally, jaws are made of 3 or 4 pieces that stick out from the drill’s chuck and are used to immobilize drill bit.

Take out the existing bit

The fact is, if you find the cutting parts of the bit are cracked, frayed or the bit’s tip seems duller then you should change the bit. Though you can sharpen the drill bit and reuse it once again but if the cutting edges get poorly damaged, put them in the scrap.

You have to keep the jaws open to attach a new drill bit efficiently. Make sure you are placing the drill bit’s flat end into the jaws. Hold the drill inside the search source using the forefinger and thumb. Keeping the drill bit firmly in the right position, tighten the jaws. Doing so will prevent the bit from slipping out and ensure secure placement. After that, you have to tighten the chuck properly.

A keyed chuck typically has 3 places where the key can be inserted. After completing the task, take out the search source key and stop holding the bit. Then power on your drill and run it for a while to check whether the bit is spinning properly or not.

How To Change a Drill Bit on A Keyless Chuck?

Changing a bit that doesn’t have a chuck key is pretty similar to the keyed chuck. But it needs to use an additional tool to complete the process instead of chuck key.

Release the chuck: Firstly, the chuck needs to be loose enough to insert or replace a drill bit efficiently. To do so, hold the chuck and the handle using both hands. Then twist the chuck counterclockwise to loosen it. If you find it hard, press the button slowly while loosening the chuck.

Apply a screwdriver: To changer the bit of a drill that doesn’t include a self-locking function; you can use a screwdriver to adjust the fastener that holds the drill bit. Insert the screwdriver into the chuck to turn the opening half. Then turn the next half using your hand. Though it should turn out easily, but if it doesn’t, use a vice or gas wrench instead of your hand. This appliance will provide the required effort to rotate the chuck.

Remove the drill bit: After loosening the chuck, you will get enough space to take out the existing bit and replace it with the new one.

Check the placement: After completing the task, switch on the drill and check whether the bit is working properly or not.

How to Change the Bit in a Drill Press

Remove the drill bit: Firstly, put the chuck key into any of the chuck holes to fit the teeth of the key into the chuck’s groove. Then twist the key anti-clockwise so that the chuck gets loose. While loosening the chuck, hold the existing bit with your other hands so it doesn’t fall down and get damaged.

Insert the New one: After removing the previous bit, it’s time to insert the new one. Remember, you have to put possibly most of the shank into the jaws of the chuck except for covering the flutes of the bit. Start tightening the chuck using your hand to prevent the drill bit from falling down. Then tightened the bit completely and the bit is ready to create the most precise holes constantly.

How to replace a bit if the chuck gets damage?

First of all, check the chuck carefully to see whether it has been damaged or just jammed. The reason is that if the chuck gets jammed, you can restore it without dismantling the whole thing. You can release the jam by gently hammering on the central sleeve or drill key. But if the chuck gets damaged, follow this method:

Start by grasping the chuck and running the power drill in opposite direction. But make sure you have worn a protective glove to avoid burning your hand. After that, soak the head of the drill in WD40 as it will help loosen the drill bit. Then hit the drill bit into the chuck to free the inside of the jaws.

If it doesn’t work, even after hitting it multiple times using a hammer, you have to apply the strap wrench. Using this appliance, hold the chuck properly and run the power drill in reverse. Hopefully, you will be able to release the chuck from the drill and you already know the further process.

FAQs on How To Change a D Bit

How to unlock a drill bit?

Fit the end of the key into the chuckholes and then rotate it anti-clockwise 5 to 6 times. Doing so will start to loosen the drill bit. If the drill doesn’t have the key, you can use a screwdriver to do the same task.

How to Change a Drill Bit in an Impact Driver?

The impact driver only accepts hex-styled bits, and it takes less time. The impact driver includes a small chuck that has a collar. You have to pull the collar out, remove the bit, and put the new one. Then release the collar and the chuck will securely hold the bit.

What can I use instead of a key to loosen the chuck?

You can use a hex wrench or screwdriver to execute the same task as a chuck key. These tools are helpful for adjusting the chuck. But it increases the possibility of damaging the chuck if you use these tools regularly.

Considering the condition of your power drill, the bit-changing experience can be different. It may require extra pressure on the spindle or taking all the parts apart. Even you can get a worse experience if the drill gets blocked due to storing in wet areas.

However, learning how to change a drill bit will greatly help you replace the bit from the drill that you use often and store properly. Above all, if the drill gets blocked and you don’t have enough confidence, leave the task to the professionals. It may cost a few pennies, but it will save your whole investment on a drill.