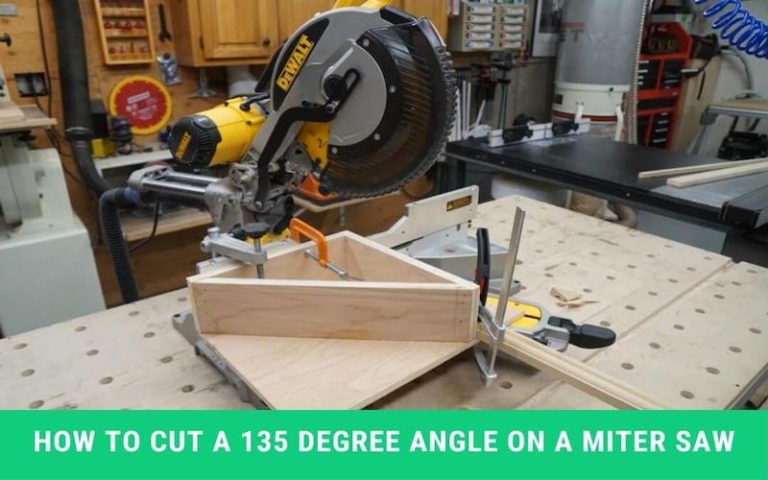 Both processes are time-saving and capable of offering accurate 135-degree angles on woodworking for your most accurate woodworking. However, we will demonstrate how to cut a 70-degree angle on a miter saw and some important tips for operating a miter saw.

Calculation of Cutting a 135 Degree Angle on A Miter Saw

A miter saw should be able to cut at 90 degrees for crosscutting and a minimum of 45 degrees both right and left for logically acute miter. Some advanced miter saws can miter up to a huge 60-degree angle. Luckily, for cutting at a 135-degree angle, this capacity is more than enough. So it is practical that you can cut 135-degree angles with this type of miter saw.  Now you may wonder how to cut a 135-degree angle on a miter saw that has less capacity than a 60°?

Fortunately, it is possible.  To cut the 135-degree angle in total, you have to use a series of acute miters. Your goal is to use two same angled symmetrical timbers to make the desired angle.

Similar to the blade of the best miter saw, if you place timber against the fence of the saw, it will create a 180-degree angle. Using this 180-degree angle, you can get the required angle by following these calculations:

According to the above calculation, you have to cut two pieces of timber at a 22.5-degree angle with a miter saw to get the desired 135-degree angle.

Following this same process, you can get any obtuse angle (not more than 180 degrees and less than 90 degrees). For example, to form an overall 120° angle, you have to cut two timbers at 30 degrees.

How to Cut a 135 Degree Angle on a Miter Saw

Set the miter saw at 22.5 degrees. You can choose either the right or left direction, but don’t forget to follow the reverse direction later. The majority of miter saws have a precise indent at 22.5°. So looking at the right angle precisely and quickly won’t be an issue. But if your miter saw doesn’t have the indent, you can still measure precisely. Use the miter gauge markings on the saw to gauge the right position and then lock it in place by tightening the handle.

Now line up the workpiece with the cut line in the miter saw. You can do so either by using the laser on the saw or by lowering the saw blade. After placing it in the right position, clamp the workpiece and start cutting. Over time, you will have the first half to form a 135-degree angle.

Next, set the miter saw at 22.5 degrees in the reverse direction of the first setting. It means adjusting the saw to the right if you cut to the left first. Once again, don’t forget to lock the saw before starting cutting.

Repeat the process of the first cut. Line up the workpiece with the laser of the saw or lower the saw blade to check against the cut line. After positioning the workpiece properly, make the second cut, and you will have a second half to complete the 135-degree angle.

Check the cuts for Alignment

Now place your two 22.5° cut workpieces on the table and check the alignment. Following those steps properly, you should have a 135-degree angle cut.  Finally, join the workpiece with dowels, dominos, or glue to finish the job.

You can also create a 135-degree angle by using 90° and 45° angles instead of 22.5°. After all, by adding 90° and 45°, you will have 135°. It may seem like a straightforward calculation, but the process will take more effort than the previous method. Even so, the final result won’t be as smooth as the first option.

Start by cutting a workpiece at a 90° angle; it’s your first part to form a 135-degree angle. Adjust the miter saw gauge at a 45° angle and cut the second workpiece. Now you will face the real difficulty. While you are going to line up these two workpieces, you won’t get a clean result. The reason is that you will find a 45° workpiece has a larger cutting face than a 90° piece. Therefore, you have to cut the excess part of the 45° workpiece that goes over the lineup so you can clear up the 135-degree angle.

After cutting the excess part, join the workpieces to get the final 135-degree angle. Apart from the extra cut, another difficulty you may face is the asymmetrical joint. Attaching these two workpieces together, you will get a slightly uneven joint, especially compared to the first method.

How to cut a 70-degree Angle on a Miter Saw

Measure and identify the place from where you want to begin cutting the 70-degree angle. Place the speed square firmly against the wood edge on the lumber flat and the edge of the square. Slide the square on the wood until you get the mark on the pivot point edge.

Grasp the pivot point tightly against the mark. Then rotate the opposite end of the protruding edge of the square away from the workpiece. Keep sliding until the edge of the workpiece becomes aligned with the 70-degree mark on the square.

Mark a line along the short flat end of the square that will sit on the lumber top. Remove the square using a straight edge and complete the drawing through the lumber. Tile the jigsaw to shut the angle that is the same as the line and begin cutting the line gradually to get the desired 70-degree angle.

Measure and mark the place where the angle will start on the lumber. Release the angle correction handle and slide the saw until it reaches 70 degrees. Press the lumber tightly against the fence of the saw and start cutting, following the marked line. Finally, cut the lumber and put the scrap off to the side.

Why Do I Use a Miter Saw to Make Angle Cuts?

A miter saw is pretty similar to a circular saw, but you can lock it in place. So, while cutting a workpiece by moving the blade down, you will have a straight cut. Miter saws offer impressive stability and ensure the least amount of error while operating.

Safety measures are the first consideration while operating any power tool, including a miter saw. Wearing safety gear is a must to remain protected against serious injuries during angle cutting. Goggles and masks will protect the eyes and face from sawdust.

While operating a miter saw, lock the knob properly at the desired angle and it will help get a precise straight cut. Because of its increased stability, the miter saw is ideal for bevel and angle cuts.

If you want to cut larger wood with a miter saw, press it firmly against the fence to get a straight and clean cut. Otherwise, the workpiece may wobble and damage the straight cut.

How to operate a miter saw while avoiding injury?

Keep the finger a minimum of 7 inches away from the blade
Don’t try to reach objects under or over the saw blade while it is running
Don’t lift the saw blade until it finishes spinning.
Lock the knob of the miter saw at the desired angle before making the miter angle cut

What you shouldn’t cut on a miter saw?

Don’t cut any solid timber on a miter saw, and don’t operate it hand-free. Another important thing is to lie the workpiece firmly against the fence on the table and don’t stand around or behind it to remain safe. Keep your hand on the handle and the trigger switch until the lower blade guard completely covers the blade.

Along with operating the right tool, applying the correct technique is vital for accurate woodworking. It means owning a miter saw won’t reward you if you don’t know how to operate it properly based on purpose, whether it is creating a 135-degree angle cut or other.

Hopefully, now you know how to cut a 135-degree angle on a miter saw by applying the proper technique. Luckily, this guide will help you make 22.5, 135, and 70-degree angle cuts to let you become a skilled woodworker.

Sam Morgan is a professional interior designer and part time content writer of Machine Handyman. He is a lifelong tools enthusiast and loves accessories of all shapes and sizes! He always research on different types of improvement tools like drill, air compressor, saw, nail gun, screw gun, grinder, cutting tools etc. Sam works hard on his project and try to find out which machine or tool will get him perfect results.