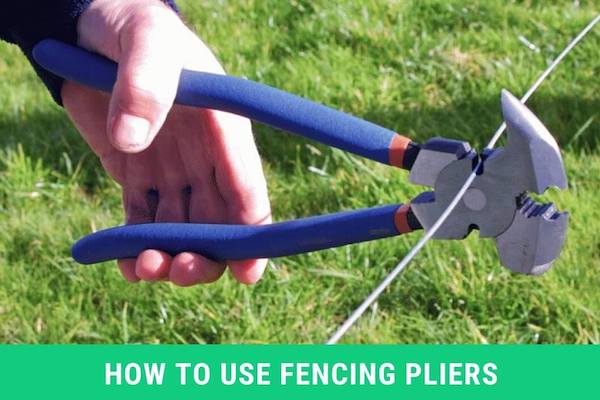 Fencing pliers are heavy duty pliers specially designed for fence work using wooden posts or fasteners. Do you think you can use fencing pliers just for fencing? I don’t think so. So, read till the end to find out how to use Fencing Pliers and where to use it.

Fence pliers function as many types of individual tools are required for all sorts of fencing. Using fencing pliers, anyone can guide or remove fasteners, tighten the cable for twisting, tensioning and mounting, or cut directly. Even, you don’t need to go for an expert fence contractor. In fact, the best fence pliers are quite affordable and economical for even the smallest of jobs.

What are Fencing Pliers Used for?

Fence Plier is a valuable tool for installing fences due to its flexibility. Fencing nail gun and pliers can vary from company to company, but most kits have a conventional set of hallmarks.

The classic fence pliers include:

When completing multiple tasks in a short period, use fencing pliers. Even you don’t have to carry bulky tools around to get the job done.

While fence pliers are popular when installing fences and posts, you may use them for just about any fencing project. Sometimes the pliers are only needed for a specific task. After that, you can leave them for a while.

Where to use fencing pliers?

The best thing about fence pliers is that it is a versatile tool ideal for different situations such as fencing, home renovation, and garage. Now, explore the way to use them.

For using pliers, firstly, you have to drive the staples. In fact, you can include fasteners into the fence using crosshatches and the flat head of the edge.

This method involves hitting the stapler stop with the hammerhead of the pliers. And so, the staples may hold a livestock panel, fence, barbed wire, or any other fence in the right place. So, you can use fencing pliers instead of staple gun for pulling out staples.

When you work with mesh fencing or repair electrical equipment, you have to work with the cables. Also, you may need some device that can strip, cut, or bend those cables.

Fortunately, you can do all of the above with the fencing pliers. You don’t have to buy wire cutters as there is a notch in the junction of the pliers for the task.

This groove, deep in the fencing plier’s chin, can cut the wire on both sides. This part allows you to strip and cut the cables according to your need. For cutting the wire with the pliers, you have to open the instrument and insert the wire into the sharp hole.

When you are in the correct position, push down on the handle and push hard on the wire for cutting it. Anyway, if you wish to strip the cable, apply less force and pull the wire until striping.

After driving the staples, you may hammer in nails with pliers. For this, press down on the nail with the face of the tool to direct it into most woods.

Fence pliers are best when anyone needs to nail down piles of softwood. In comparison, hardwood posts can be more complex and require a nail gun.

For hardwood, you can use pliers, but don’t pound them. Instead, you may use the hole in the nail to hold the nail in place while continuing to hammer to make sure it hits the wood.

Remember: You can use pliers to cut off the nail’s end that sticks too hard. This way, you can guarantee your pet’s and children’s safety.

Tighten and Grip the Wires

If you want to build fencing that requires some wire, you can use fence pliers for holding the wires perfectly. For this, cover the wire throughout the fence pillars and wrap each wire knot around the fence. Then utilize the plier’s jaw to grip the wire tight enough to wrap it throughout the fence into a circular movement.

Then grasp the wire firmly with the pliers, plus twist it in a circular motion. It will turn the wire into the loop that contracts in one direction with each twist.

However, it will keep your fence stable. In addition, you can tighten a worn-out wire fence effectively with pliers.

If you are doing carpentry, fencing, or simple home renovations, you may also need to remove the staples. Fortunately, the fence pliers are only helpful for this purpose.

The long, curved end of the pliers acts like a stapler, placing it below the stapler center and pulling it out. After inserting the pliers correctly, press firmly in the opposite direction to release the stapler.

Also, you can tilt the fence pliers or utilize the staple’s surface as a lever to pull out the tightest staples. This piece of pliers works just like a curved tip of a conventional nail hammer.

One last way to remove the staples is to use tweezers in the head’s center. Use the tool to hold the stapler, press and pull on the facade to exclude it.

Can I use fencing pliers instead of nail gun?

A nail gun can shoot 2-1 / 2 “ring nails. The ideal nail gun provides the correct type and size of nails for the wood used for the fence.

Farmers and herders use fencing pliers to work on wire fencing. These reusable pliers are meager enough to fit in the back pocket of your jeans. Still, they can stretch wires, cut cables, pull out fasteners. Also, it contains a small hammerhead to attach a loose or stapler.

Finally, we can say that nail guns shoot nails with the fence. Also, the small-headed hammer can reattach the loose nail or stapler. That means the function is almost similar in terms of fencing. So, you can use fencing pliers instead of a nail gun without any hassle.

FAQs on How to use Fencing Pliers

Yes, you can cut the wire using fencing pliers. You don’t have to purchase wire cutters because you will find a slot in the loop for cutting wires. This groove, which is deep in the chin, can cut the wire on both sides. In this section, you can trim and strip the cables according to your need. That’s why most stockmen and ranchers use it.

What do I cut fence wire with?

Most people use wire cutters to cut fence wire, and it’s the most common way. Also, you can use tin-snips, hacksaw, reciprocating saw, and grinder to cut wire. Tin-snips are also handy if you cut chicken wire. There are some 24-inch bolt cutters out there that can cut heavy gauge wire. If your fence wire is mesh, use a rotary tool and cut through the mesh.

How do you cut a wire without pliers?

Fencing pliers are designed to cut virtually any wire quickly and cleanly. Without fencing pliers, it can be an arduous task. If your wiring is thinner and relatively flexible, you can try twisting it. Just bend from the fourth and back until the wires start to break. You can use a hacksaw on this occasion to make things easier. An angle grinder, tin-snip, or reciprocating saw can also be handy if you don’t have any fence pliers nearby.

I think the use of fencing pliers will always amaze anyone. The fence pliers can cut anything that falls between the jaws. Also, they act like medium-sized hammers, and you can use their strong hook on the back to pull the staples out of the fence. Alternatively, you can use many sizes of crimp for real-life fences or electrical works.

A robust steel-making process, combined with soft grip handles, ensures that it will last for years in the construction and maintenance of all types of fencing. It is the only sophisticated tool that allows you to cut, twist, pull, stretch, tighten, and crimp fences into a compact tool. You can easily carry them like a gun in your pocket!