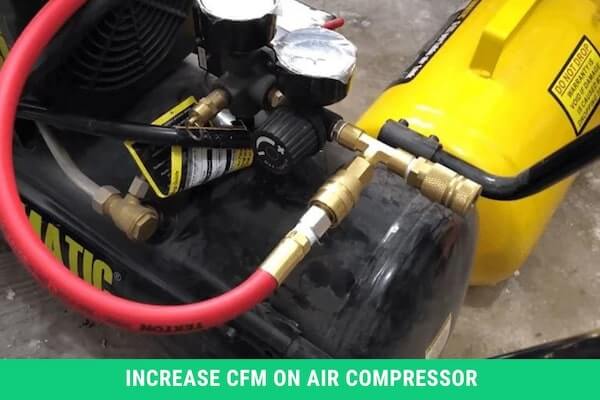 Increasing the CFM of an air compressor with a certain air tool is easy task. But if the process become wrong, then the air compressor’s CFM will damage your project. So, learning how to increase CFM on air compressors in the right and safe way can save some bucks as well as allow us to continue the project.

Air compressors often need to connect with a variety of air tools, including framing nailers guns and impact wrenches that vary in CFM. So adjusting the CFM of an air compressor can increase productivity, but it’s a risky task. Applying the wrong process can damage the best air compressor that’s capable of filling up the tank.

Guides to increase CFM on an air compressor

We will reveal some effective yet easier methods to help you increase the CFM of the air compressor confidently. The article will teach you about the right CFM for certain air tools and the CFM reducing process so you can apply it if needed.

Lessening the Pressure to Increase CFM

An air compressor intakes air at the first stage and then creates pressure inside the tank. This pressure controls the air release rate, which is known as CFM. Different air compressors come with specific power levels depending on their CFM and pressure. Mathematically, Power= Pressure X (Volume/Time) where Volume/Time is CFM. So, keeping the power constant, if you want to increase CFM, you will need to reduce the pressure. You have to dial down the regular to make this happen.

Once Dialling the regulator is down, the air will start to gradually flow into the tank, which creates a lower pressure inside the tank. This lower pressure will offer a higher level of CFM.

For example, an air compressor with a 5 CFM at 90 PSI will offer you an air output volume of 5 CFM if the pressure reaches 90 PSI. But if you lower the pressure to 90 PSI, you will have an air output of over 5 CFM. It’s a safer way to enjoy higher CFM. This method won’t cause any damage to the air compressor, but it will let you reach a specific limit.

This method is effective for having higher CFM beyond the air compressor limits, but it has some terms. The process requires two air compressors. If you don’t have a double compressor and are planning to get one, make sure it will be worthwhile for your project. If the type of work demands higher CFM, it is recommended to buy a higher CFM air compressor.

As a beginner, go down slowly rather than going for the lowest setting in one effort. It will offer you the highest CFM output safely and eventually. An impressive thing about this method is that it will increase the longevity of the air compressor along with CFM.

Pro suggestion: likewise to the first method, this process will offer you a slightly higher CFM. But if you need double CFM, the second process is recommended.

How much CFM needed to an Air Compressor?

The requirement for CFM is varied for different air tools, where some tools need higher CFM and others need lower. For example, it needs to increase CFM to run through the impact wrench, while the framing screw requires lower CFM. Depending on the tools, to use the compressor for the impact wrench, you will have to set the CFM at 5-8 CFM at 90 PSI. Similarly, 5-7 CFM at 30-40 PSI is recommended for spraying paint.

Conversely, a pneumatic stapler only needs 0.3 to 0.5 CFM and the framing nailer is happy with 2.5 CFM to complete the project. It means the user had to change the CFM considering the air tools and purposes.

How to decrease the CFM of an air compressor?

But it’s a risky process as falling the CFM level too much can reduce the tank’s ability to fill up. It can even stop the air tool that you are using with compressed air. The ideal way to ensure lower CFM for the project is to use an air compressor with lower CFM. It may cost some extra money, but it will be a one-time investment for a precise operation. More importantly, it will save the air compressor from getting any damage.

Why ensuring the right CFM is important for air tools?

It’s a vital question and many people are already aware of it. Running an air tool with improper CFM won’t let the tool work well. It can not only damage the air tool but also hurt the working surface. The following are some of the importance of setting the CFM at the right level for the air tool:

FAQs on How to increase CFM on Air Compressor

Does adding a tank increase CFM?

Yes! Adding an extra tank can double the CFM. In fact, it’s an effective way to enjoy higher CFM than the air compressor limits. We have already discussed the process above.

Can I have increased CFM without reducing PSI?

Lowering the PSI will ultimately increase the CFM and it’s a great way to increase CFM. If you have an air compressor with 9 CFM and 125 PSI, you will have 9 CFM of air output if the pressure reaches 125 PSI. But if you turn the PSI down, it will increase the CFM.

It depends on the requirements of a certain project and the tools. An air compressor with a higher CFM will be the best for you if you need to operate an impact wrench or spray paint. But if the project demands a pneumatic stapler, then you choose a water compressor with a lower CFM.

Knowing how to increase CFM on an air compressor is simple stuff. But applying the process takes serious experience and execution; otherwise, it can end up with rambling. So if you are a beginner and don’t have enough confidence, call for expert consultancy.

Despite buying an air compressor with higher CFM if the project demands higher CFM more often, But if you have basic knowledge of air compressors and enough confidence, the process we have mentioned will be handy for you.